Article published by DTU Science Park in collaboration with the Vaekstfonden. The article is part of the Vaekstfonden’s report From startup to scaleup, which was handed out at this year’s TechBBQ.

The Danish Chamber of Commerce states that 36,400 new Danish companies were established in 2018, which is a record number compared to previous years and a clear sign that entrepreneurship is thriving in Denmark.

With a well-developed and supportive ecosystem where Danish startups can grow, and with stories of startups like Tradeshift and Trustpilot that in a matter of only a few years are close to having evolved into ‘unicorns’, it looks like a recipe for success.

According to Vaekstfonden, the 100% digital companies experience the most rapid growth.

But we must not be blinded by this success – because while entrepreneurship is well established in Denmark, there are still too few new companies that actually become large companies and it generally still takes a very long time to get there.  According to Vaekstfonden, the average age for companies in Denmark with more than 1,000 employees is approximately 90 years, and in 2015 only 450 Danish companies had a turnover of more than DKK 1 billion. Although we have recently seen some businesses grow into large companies over the span of only a few years, the general rule is still that it takes many years to upscale a business to just 200 employees. This is particularly true for the more technology-intensive companies.

Unlike the purely digital companies, there are thus many others who find that it can take more than ten years to create a concept, develop a product, and cultivate a market before actually experiencing real growth. Vaekstfonden describes this process as the long haul.

The long haul is characterized by a long, complicated, and costly development phase and a more difficult and demanding upscale, thus also requiring more funds. For many of these companies, it takes 5, 10, 15 years or more to really get going and experience serious growth. On the other hand, once successful, these companies often create a lot of jobs, have great impact, and often incorporate in their business a goal of transforming and improving the world. Such companies often fall into the ‘deep tech’ category.

DTU Science Park works with deep tech companies. Together with the entire DTU ecosystem, we are trying to create a deep tech ecosystem that nurtures development, growth, and upscaling for deep tech companies. With DTU as a stronghold for talent and knowledge that helps to create new startups, players such as DTU Skylab and Danish Tech Challenge which builds up and further develops early-stage startups, and DTU Science Park which houses, supports, and stimulates research-intensive businesses and startups, the aim is to ensure optimum development conditions for deep tech startups and companies.

Among other things, DTU Science Park has held the Danish Tech Challenge (DTC) in collaboration with the Danish Industry Foundation for the past five years. Danish Tech Challenge is a four-month accelerator programme for early-stage hardware and deep tech startups. The accelerator programme started in 2014 with the aim of working with and provide resources for deep tech startups. This is done through a tailor-made programme, where skills, experience, and know-how supports the selected startups, so that the long development and growth phases can hopefully be shortened.

100 startups have been through the programme since 2014, and each year a jury of investors, serial entrepreneurs, and others from the ecosystem select the 20 most ambitious and promising early-stage deep tech startups from a list of more than 100 potential participants for the Danish Tech Challenge. This means that some of the best Danish early-stage deep tech startups are given the opportunity to participate. But being in the right environment and being supported with the right skills and know-how is one thing – it is just as important to get funding and establish a capital base for your startup.  And, unfortunately, we experience significant challenges in this area, because although these companies attract investors, they do not build enough capital.  And without funding, it is often very difficult to develop a company and, not least, to upscale it.

In 2019, DTU Science Park and the Danish Tech Challenge conducted a quantitative analysis of the 100 startups that have participated in the accelerator programme since 2014. The purpose of the analysis was to gain a better insight into the development, growth, and performance of these companies. Capital acquisition was one of the key elements of the study.

The figure below shows the total amount of funding received by early-stage deep tech startups from the Danish Tech Challenge and where the funds come from: 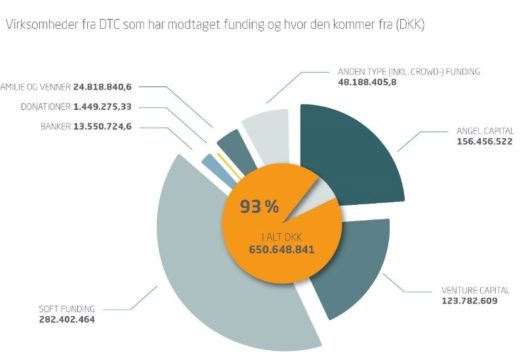 On average, companies are just over four years old and the survival rate of the companies that participated in the DTC is 93%—significantly above the general average. Together, the 93 surviving companies have created more than 500 new jobs and several of them have begun to create revenue. However, as shown in the figure above, the 93 companies received only DKK 650,648,841 million in funding. Approximately 55% of the funding is soft funding such as donations, help from family and friends, and other types of soft funding, and 45% is hard funding such as angel capitals, venture capitals, and banks.  At first glance, those numbers are fine. The interest in these companies from funds, investors, and banks demonstrates their high level of innovation as well as their growth potential.

However, a closer look at the numbers reveals that getting funding for deep tech startups is still very difficult. In 2018, the Danish Venture Capital & Private Equity Association uncovered the largest investment rounds in 10 Danish companies. The majority of these were in the software and IT fields. Together, they raised nearly DKK 4 billion in 2018 alone. These companies are, of course, long past the early stage and have a product, are in a market, experience traction in the form of sales and turnover, and are already good business yielding returns. But compared to the 100 Danish Tech Challenge deep tech startups, which are four years old on average (some in their first year and others in their tenth), the average funding for the 93 deep tech startups of approximately DKK 7 million is peanuts.

In addition, the numbers also show that when the necessary funding needs to be raised, deep tech companies have to spend an extraordinarily long time seeking out a large number of funding sources. A total of seven different types of funding sources have been approached to ensure that the 93 deep tech startups could receive approximately DKK 650 million, and on average, the companies have used five different types of funding and have thus only acquired DKK 1.4 million from each source on average. When asked, the company founders estimated that they spend more than a third of their time raising funds instead of actually running the business. 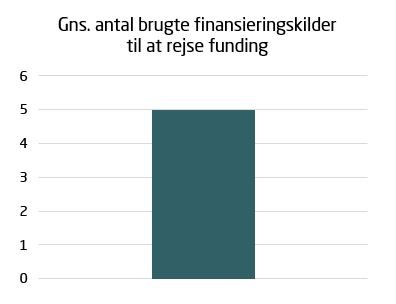 When looking at the overall amount of funding received by the 93 deep tech startups, the companies receive relatively small amounts from the various funding sources. For many of these more established deep tech startups, this means that raising funds is similar to bootstrapping, despite the fact that these companies are looking for and need more solid amounts. The downside is thus that the process of developing and growing these companies, which is already long, is extended even further. This means that the risk of investing in these companies is estimated as being higher, and thus it becomes even harder for deep tech companies to raise capital. And that is in spite of the high survival rate, positive development, and potential of many of these companies.

A closer look at the numbers also reveals that the deep tech area is difficult to navigate, and that the fundraising challenge does not make it easier. Due to the complexity of the deep tech companies, the long development phases, and the slow upscaling, it is difficult to raise funds and to raise large sums in one go. And that is a problem taking into account that some of these companies are supposed to grow into tomorrow’s Danish industrial companies. With funding difficulties, the prophecy that deep tech/hardware takes a long time to grow becomes a self-fulfilling prophecy.

On the other hand, more money and more patience from foundations, investors, and other players in the finance environment could shorten the long development phases of deep tech startups and thus contribute to the creation future industrial companies and solid returns. In other words, it is often better business to invest large amounts at a higher valuation than low amounts at a lower evaluation.

We need a bolder funding system

Deep tech startups are important to Denmark. With the climate and the UN Sustainable Development Goals on the political agenda, and with a Danish industry that wants Danish companies to solve major global problems and be global frontrunners, we need the technology-intensive startups that will find solutions to the key challenges of the future. But someone needs to have the courage to capitalize these companies, despite the greater risks and longer development and growth phases. The lack of appetite for investment in deep tech companies on sensible terms is, unfortunately, increasingly forcing these companies to look abroad, and at DTU Science Park, we see that more and more companies are looking for investors overseas. And with good reason. For example, a report shows that 16 early-stage startups from the Lund University environment have raised more than SEK 1.2 billion over the past four years just from the Swedish stock exchange—i.e. more than DKK 50 million per company on average.