After four months of intensive acceleration, PentaLock, which has developed an intelligent bike lock, has been named the winner of Denmark’s biggest hardware competition, Danish Tech Challenge. HRH Crown Prince Frederik presented the Danish Industry Foundation’s Entrepreneur Award to the winner together with a cheque for DKK 500,000.

Six hardware startups participated in the grand final when, on 23 June 2020, Danish Tech Challenge named the winner of the Danish Industry Foundation’s Entrepreneur Award with a prize of DKK 500,000 at the annual award show in Copenhagen.

“It’s incredible—it’s beyond our wildest dreams. But of course we believe in the product, and it’s great to get the recognition. The money will be invested in the company, so we can really speed things up. The DTC program has forced us to scale up faster, try out certain things and to stop being so concerned about making mistakes, so it’s now a completely different company to what it was four months ago,” says Emil Norup, CEO and co-founder of PentaLock. 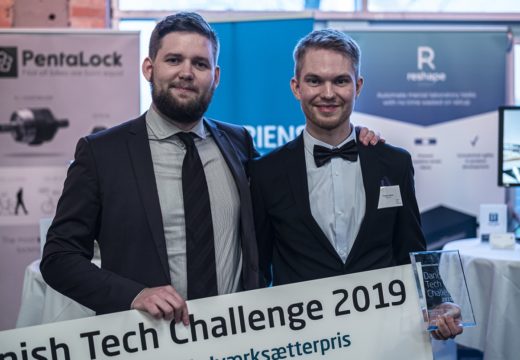 The award show on 23 January concluded the Danish Tech Challenge season for the year—a high-intensity growth programme for some of Denmark’s most talented hardware startups.

Danish Tech Challenge helps hardware startups involved in creating new and innovative physical products to make the shift from startup to to scale-up, as it is growth companies that will drive the development of tomorrow’s industry and create new jobs in Denmark.

Sten Scheibye, Chairman of the Board of Directors of the Danish Industry Foundation:

“Entrepreneurship is thriving in Denmark, but there are still too few companies evolving into growth companies and generating exports. Danish Tech Challenge is designed to provide the framework for companies to accelerate and get to the market faster.”

“For the majority of this kind of startup, it is decisive to secure long-term investment for the ongoing growth cycle, but everything has to be shipshape to bring investors on board at such an early stage. So, during the four-month acceleration programme, the startups are repeatedly trained and challenged in their business acumen, sales, marketing, capital raising, product development, law, approval needs, and much more.”

Over the past four months, an intense selection process has taken place behind the scenes at DTU Science Park’s incubator and accelerator Futurebox, where participants move in once they have been admitted to the Danish Tech Challenge.

More than 80 startups applied to participate, of which the 20 most promising were selected. Every week, the companies have been judged according to different parameters, and slowly but surely, the field has been whittled down to this year’s winner. The jury said the following about Pentalock:

“It’s a simple and technically well-designed product with a strong IP and huge market potential. We believe that the timing is right for the company, and that they have developed a product which is far superior to existing solutions. A product that makes sense and is easy to understand. It’s ingeniously simple.”

Watch the interview with PentaLock

Danish Tech Challenge is a unique accelerator program for hardware startups, where entrepreneurs accelerate the development of their enterprise while participating in the competition for the Danish Industry Foundation’s Entrepreneur Award with a prize of DKK 500,000.

"The DTC program has forced us to scale up faster, try out certain things and to stop being so concerned about making mistakes, so it’s now a completely different company to what it was four months ago."